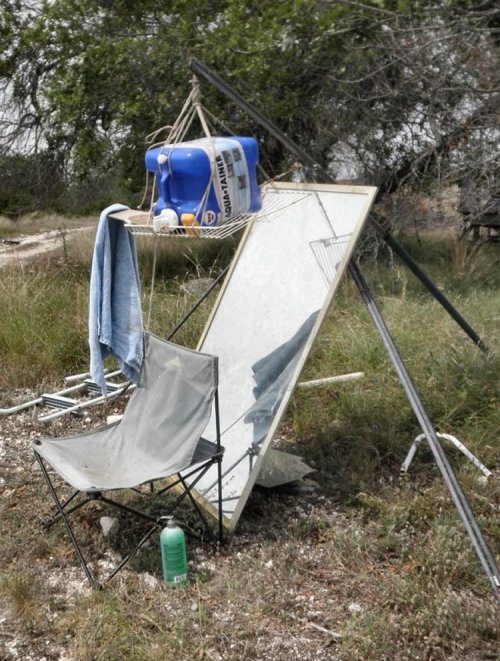 This was briefly my smartassed solar shower.  Lasted through one, count’em: 1 each of those 8 gallon water jugs.  Getting 60 pounds of water up there in a way so’s it will stay decided me the showering I got wasn’t worth the hernia I almost got.

So next time in town I went to Walmart and bought a 2 gallon insecticide sprayer.

Bummer if that tree fell on your house 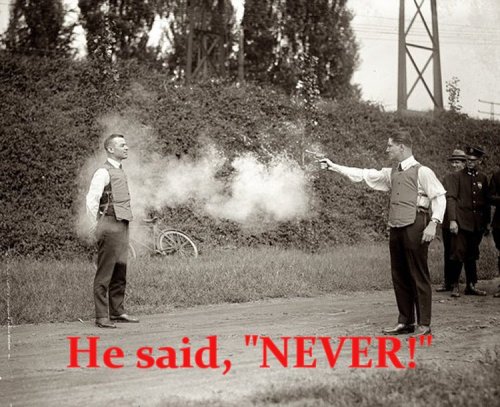 Ever noticed how many people hang around discussion boards of every description watching for things they can tell other people NEVER to do?

NEVER play with matches! NEVER ride a bicycle with no brakes! NEVER point an acetylene torch at your face when you light it! NEVER try to get inside a tree shredder while it’s running!

I think there must be something about typing a command about never that feels validating, self-affirming. Telling people what they’ll either have better sense than to do anyway, or who will pay no attention and will do it anyway.

And the fact is, it could as easily be said in ways people might listen to because it wasn’t so offensive and presumptuously downtalking:  How about, “Sure would be a big bummer for a person to get his hair caught in that fanbelt.” Something along those lines.

About the only response I can think of appropriate to the NEVER command is “NEVER say NEVER!”

Guy with the RV sent me some more pics.

From the front there doesn’t appear to have ever been a collision on that side.  No pics of the other side. 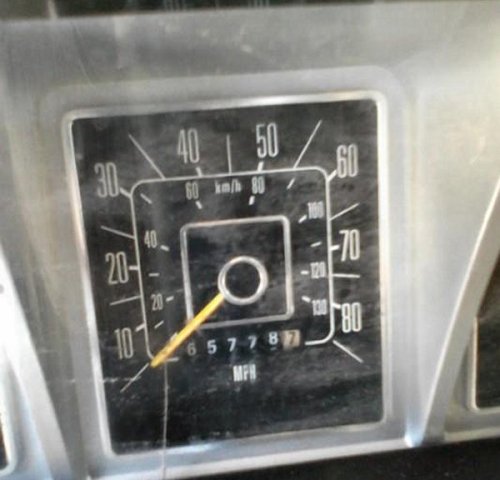 Bummer that it only has 80 MPH on the speedometer.  I’d figured on coasting down mountains at 110 or better. 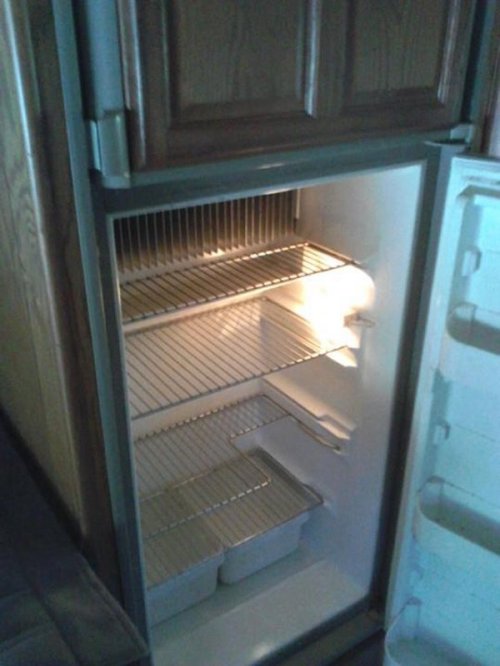 He says the fridge isn’t the original.  Says the closed compartment above is a freezer. 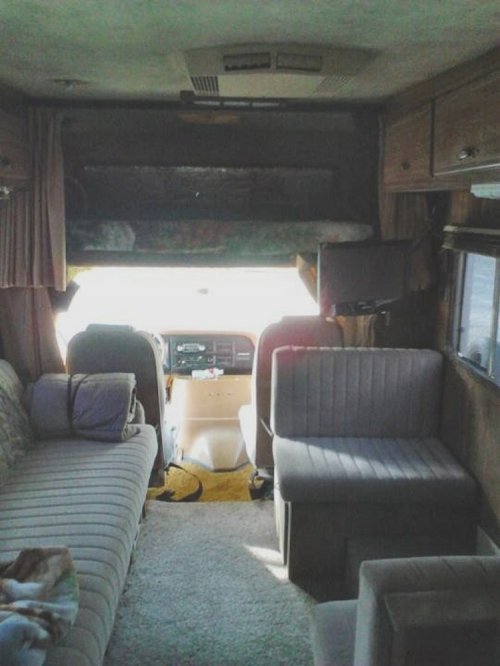 Says that’s new carpet, which the cats should appreciate.  In fact, all that interior needs a few layers of cat hair before it will be able to call itself home.

I stepped out of the RV to pee around 4:00 am and since it was too dark to read while I stood there pondering life to pass the time.  Tried to anticipate whether, late as it was, I’d be able to get back to sleep, or should I come indoors and do some work on the computer I’d been putting off doing.

So when I finished I’d decided to go up to the cabin and get some coffee, maybe do the comp thing.  But I noticed the wind had blown over a chair where I’d left a pinch bar and it was on the ground.  Picked it up and headed for the cabin porch.

Suddenly I was proud to have the pinchbar because one of the bigger coons I’ve ever encountered met me at the head of the steps, teeth bared.  I leaned backward to begin a step and the coon leaned forward suggesting he/she’d be following while I reared the pinchbar back to strike if needed.

Coon came down the top step with its front legs looking me straight in the eye when I spang hit it with the pinchbar and knocked it backward onto the porch.  This was beginning to tick me off.

I came up the first step while the coon turned around to face me again baring teeth and sort of whine/growling, not much of a pause before it came fast and I whacked hell out of it again upside the head.

Stunned it enough to give me time to think a moment and decide I wasn’t crazy about how this was all going, so as the coon struggled up and turned to face me I hit it again, this time with all the force I could muster.  Took it down again, but not dead, not unconscious.

So I stepped into the cabin and dragged out a .22 pistol inside the door, turned back around just in time to have the coon turning on me again.

Lousy way to start a day.