Old Sol’s Moodiness and Being a Character In a Book

In case you’re one of those people who hasn’t been staring at the sun, here’s a brief update before I tell you about an interesting tidbit in my life:  Finding myself a character in a ‘memoir’ [actually a novel] written by my step-brother published as non-fiction.  But important things first:

As you can see, the south pole stuff’s maintaining itself, still doing what it was doing when I last mentioned it.

Still something going on down there, but the grandstanding is still north of the equator.

SINUOUS SUNSPOTS: A line of sunspots stretching across the sun’s northern hemisphere appears to be an independent sequence of dark cores. A telescope tuned to the red glow of solar hydrogen, however, reveals something different. The sunspots are connected by sinuous filaments of magnetism: 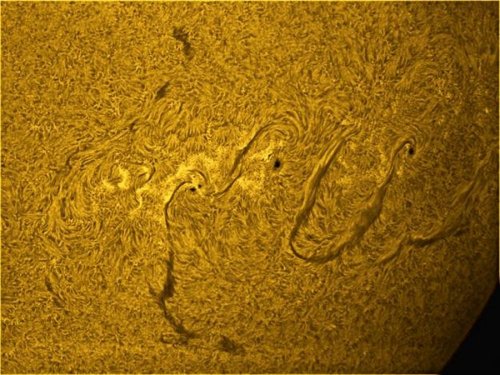 “These sunspots writhe and squirm energetically as they rotate away from us!” says John Nassr, who took the picture on Nov. 28th from his backyard observatory in Baguio, the Philippines.

The connections suggest an interesting possibility. While each sunspot individually poses little threat for strong solar flares, an instability in one could start a chain reaction involving all, leading to a widespread eruption. Readers with solar telescopes are encouraged to monitor developments.

I could write a lot about this but none of it would necessarily be true, so I’m doing my best not to have an opinion while keeping my foot in the door for afterward saying “I told you so,” if I can get by with it.

Okay.  Now for the main thrust of this post.  Before beginning the post I visited the Bobby Jack Nelson Forum on Amazon to see what was being said about him: http://tinyurl.com/7zj2la3

A while back I got an email on an old email address I rarely check anymore from a lady who wanted to discuss my step-brother, Bobby Jack Nelson.  She explained he’d offed himself in a nursing home in San Saba, Texas, and that she’d had a long-term relationship with him.

But Bob had told her a lot of things she’d begun to think were lies.  She just wanted to bounce some of them off me because she knew he and I had associated considerably during the 1980s and early 1990s when he was writing Keepers – A Memoir. http://tinyurl.com/d82tcsk.

To be honest the whole thing qualified as strange enough to keep life worth living.  Bob and I saw quite a bit of one another during those years, and I knew he was writing a novel about, among other things, his childhood in Portales, New Mexico.  I considered him a friend.

But one day in the late-1990s [as soon as the novel had been accepted by a publishing house, I later discovered] while I was living in Socorro, New Mexico, I got a call from Bob.  He didn’t mention the novel, but he said he was going off to South America and wouldn’t be returning to the US, so I wouldn’t be hearing any more from him.

I got reports from various mutual acquaintances they’d seen him in Texas here and there, so I figured he just wanted to break off our association, which was puzzling, but okay by me.  Then I got a call from a Dallas reporter asking what I thought of the book, which I hadn’t been aware was published.

Naturally, I bought and read a copy.  Suddenly it was clear to me why the reporter had called me, but also why Bob had suddenly taken a powder.  My first reaction to reading it would have been to trip up to that mountain town he was staying in while writing it and beat hell out of him.

I was honestly dumbfounded the man could bring himself to publish such a pack of lies as non-fiction.  But a person would have had to have been there, or remembered what he’d said back earlier had happened, to recognize there was barely a grain of truth in any of it.

Gradually I cooled down and just forgot about Bob until the lady contacted me to tell me he was dead, and how he’d died.

We exchanged a lot of emails over several months, and it was a journey of mutual discovery.  But the discoveries came in the form of Bob being an even worse liar than I’d have thought possible knowing already he was an accomplished liar.  And for her, not knowing he was a liar at all, I suppose it provided her some closure to find the man she loved, somewhat idolized, was in awe of, was not the person she’d believed him to be.

Oddly enough, I think Bob tried to warn me a number of times about himself.  Several times he told me over the years that he was a liar, but I didn’t grasp the extent of what he was saying.  Other times he told me he wasn’t what I thought he was, and I shrugged that off, too.

But what came as a shock to me, first with the book, and later with what the lady told me, was that Bob absolutely despised me.  That, I’d have never guessed during the years I wasted pieces of my life associating with him in what seemed a mutually warm, friendly relationship.