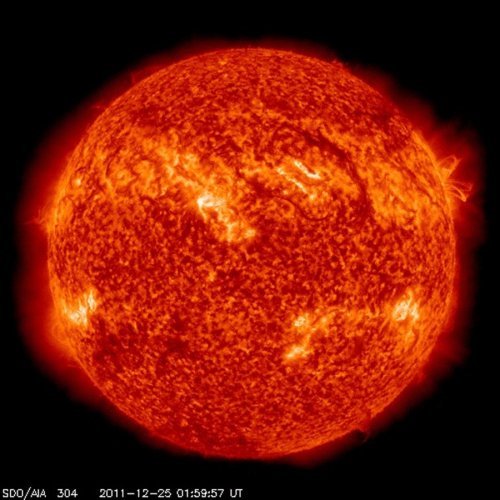 I don’t know what Old Sol got for Chrismas, but he was pretty hot about it.

Or maybe it was something he ate.

The C5-class eruption hurled a billion-ton coronal mass ejection (CME) into space, but not toward Earth. With the cloud sailing wide-left of our planet, Christmas geomagnetic storms are unlikely. Nevertheless, this active region merits watching as it turns toward Earth in the days ahead, possibly positioning itself for the first storms of 2012.

On the other hand, a minority of physicists and astrophysicists theorize Old Sol’s just hurling back all those marching orders he got from Alpha Centauri and other nearby stars telling him what kind of Christmas to have.  They support their premise on the evidence hasn’t eaten anything lately and the instruments haven’t recorded him getting anything for Christmas worth getting upset about.   Unless he objects to Chinese manufactured products.

I’d suggest we all try to stay calm until we have a clearer idea what’s on his mind.

This entry was posted in 2011, Astronomy and tagged Astronomy, culture, environment, Events, humor, Life, Nature, other, science. Bookmark the permalink.