Hi readers.  Probably most of you know already that human beings are being selectively bred for food by competing species of space aliens.  That’s what’s causing so much trouble for us as a species.  Our damned overlords can’t make up their minds, keep changing what they want from us.

It’s the reason French mothers gave birth to a century of runts after Napoleon got a generation of their male breeding stock killed off in Spain, Portugal and Europe.  Then the other group of space aliens got into the driver-seat and brought Germans, British and Americans into France with WWI to impregnate all the French women in an attempt to undo the Napoleonic accomplishments.

It’s the reason cheerleaders want to propagate with football stars.  One of the groups of space aliens likes the physical traits, dumb as cluckshit, beefy males, big titty women, and they want a strain of offspring for their high-dollar eating joints.

A few people probably still doubt this is happening, but all you have to do is look around you to prove it to yourself.  Why do you think all those fast food joints are out there peppering the surface of our great land?  One of those groups of space aliens is fond of meat with a lot of fat on it.

The one thing all the space alien species agree about, though, is brains.  A human brain is about the same amount of food product for discerning aliens, whether it’s generally a brain with an IQ of 80, or one of 150.  And the one with an IQ of 80 gives them one hell of a lot less trouble.

Space aliens all do everything they can think of to improve the likelihood their breeding stock is nearer 80 IQ than anything higher.  And they’re fairly successful in that regard.

I just wish they’d make up their minds about the rest of it.  All this seesawing back and forth over football and wars gets old after a while.

A few old guys of the same species sitting around Kerrville, Texas wondering where the world went.  Each too different from the others to guess which parts they missed.  Old guy the others knew walked up and sat down.

Silver gray hair in a ponytail, 70ish, shorts and sandals with athletic stockings, heavyset.  We shook hands and I studied his features.  In Texas he looked definitely out-of-place, though he could have been Hispanic throwback gene pool.  But something in the features and skin pigment had me suspecting he was a Navajo or Apache.  A curiosity because Native Americans aren’t much drawn to Texas as a home.

Finally my puzzlement got the best of me.  “Where are you from?”

“Yeah, but what TRIBE Swedish?”

Minneconjou Lakota, it turned out.  Born in a US Public Health hospital on the Rez in Minnesota.  Mama a party woman, no idea who his pappa was.  Reared by his grandma, then sent off to Indian School.  Learned to be a welder and pipe-fitter.

By 1970-or-so he was up in Alaska on the North Slope a few years building the first Alaskan pipeline across the permafrost.  Had a few stories to tell about that, then all of us began picking his mind for all manner of details.  “How deep did they have to go setting the pilings holding up those pipe joints?”  “How were you housed?”  And so on.

Turned out all the oil from that field was shipped directly to Japan.  US refineries weren’t tuned to that sort of crude.  But the fields are still producing.

Guy has a tribal census number, but never went back to live on the Rez, but visited his grandma there until she died.  Brought tears to his eyes thinking about her.  Never used the free health-care/dental-care for life benefit available to him because of the tribal census number US Public Health Service offers.

“I worked hard all my life and settled here.  Paid my own way every step along.  Making a lifetime job of being an Indian didn’t appeal to me much.  When they quit shooting us they tried to offer that as the next best thing.

“They’re still trying, got all those liberal white people to worship blanket Indians.  Better than getting shot, but not as good as kicking the whole damned mess.”  He shook his head.  “Damned white people and their congratulations for being victims will finish off all the ones left.”

Nice meeting him.  I hope I see him again before I head for the tall timber.  Being born into a trap doesn’t mean there’s no escaping it, I reckons.

Hi readers.  There’s something weird going on in the US you probably aren’t aware of unless you happen to be someone who plinks with a .22 rifle or pistol.  Or maybe a firearm of some other caliber.

But it’s been going on two years now, still going on today.  Ammunition manufacturers in China, Mexico, Russia, Czechoslovakia the US and elsewhere are working three shifts turning it out and shipping it t0 retail outlets and online suppliers.  They’re nowhere near satisfying the demand.

WalMart stores, for instance, get a shipment in during the night and before the store’s been open an hour there’s no more .22 ammo and damned little of anything else.

For reasons nobody anywhere can explain US citizens are filling the closets and garages with ammunition, mostly .22 caliber.

This silent, subtle fact is lurking in the periphery of something a lot larger, and I’ve spent a lot of time discussing it with anyone who might have ideas as to why it’s happening.  Everyone has ideas, and everyone admits they’re as mystified as I am what it means. 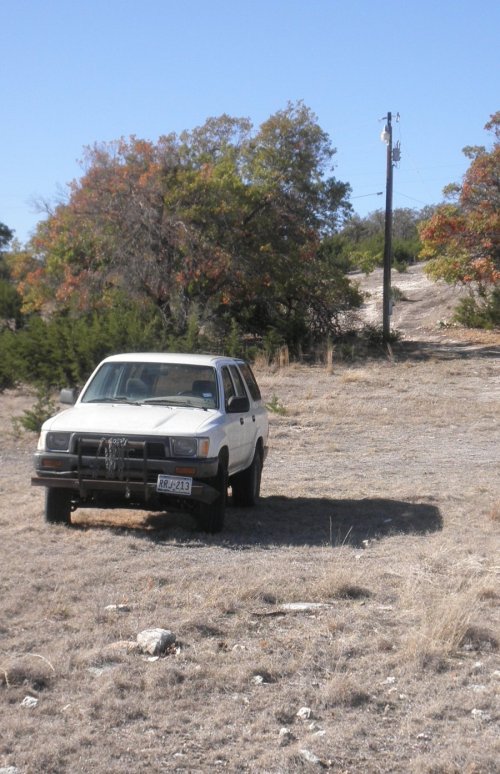 Certain types of problems seem to follow us through life, probably so’s the Universe can teach us whatever lessons it is we’re supposed to be learning during this one.  Frequently we’re slow coming to an understanding as to what ours are.  Mine, I suspect, probably are a consequence of karma acquired during a previous lifetime involving motor vehicles.

Which I hadn’t realized until I began looking at all the posts here involving transportation during my stay here.  One piece of that saga was the Toyota 4 Runner that carried me to this piece of real estate in 2008.  And became a subplot microsaga:

Got me a new truck!

A long one.  And one I’m finally going to apply a razor to.  I’ve found a guy who’ll follow me back out here next time I go to Kerrville, and put that 4 Runner onto a car dolly, pull it out of my life.

I went out and put the wheel back on it, took it off blocks and pushed it up the hill with the Toyota RV far enough so’s we’ll be able to get it onto the dolly.  Gale and the guy up the hill came out and improved the road enough yesterday with some machinery so’s a regular person will be able to get in and out of the valley without blowing a tire.

It’s not easy for me to part with that 4 Runner.  Lots of life history events trapped in it, but it’s clear enough the time’s come for a denouement.  Turns out I’ll be doing something similar with the Toyota RV, because Jeanne’s son, Michael’s decided it’s not the best option for him.

I’m willing to believe, for the moment, that when the 4 Runner goes out of this valley I’ll have poured enough of the life-ingredients into it to have filled whatever hole it was the vehicle challenges demanded of me this lifetime and I can have some other kind for a while.