Saimen – Another trek into Ramen country

Hi readers.  I’ve been planning to share this with you a while but keep forgetting.

Back when David McCreary and I got bounced out of Peace Corps India X training at Hilo, then jumped the plane to seek our destinies in Honolulu  we were dirt poor.  Sharing a room at a rooming house up on East Manoa Road.  Him working as a drink waiter at the Kohala Hilton, me busboying down at the Makahiki of the Hilton Hawaiian Village.

Dirt poor, so we ate a lot of Saimen.  Something I’ve never heard of since, but a person could get a bowl for a quarter at any food joint in Honolulu.

So I began a while back experimenting, trying to recreate Saimen using Ramen.  Bought green onion, chopped it all the way back to the tips of the green, all the way forward to the root.  Threw in minced garlic, ginger, fish, or chicken, or meat if I had some.  Sometimes a dash of curry, habenero, whatever comes to hand.

Boiled down all the other ingredients a considerable while to make a strong flavored broth.  Then at the last minutes of the just-right tastehood, added Ramen noodles, or small diameter pasta sticks.

This stuff’s as good today as it was in 1964 in Honolulu.  It would even be good if 1964 never happened and had to get replaced with some other year.

Bonfire of the vanities

I’ve got this box of US Archives microfilm of all the US Army Civil War correspondence for the Department of New Mexico and Arizona staring at me.  Wasted a phone call to the  Arizona State Archives, talked to a clerk who’d have her boss get back to me if they wanted them.

No joy.  I suppose I might yet find a university, or the NM or Texans might want them for their State Archives.  It’s got the California Volunteers activities, and the Union perspectives on what all those Texas troops were doing raising hell up the Rio Grande.  Nice description of how, when the last Texans had retreated to Fort Davis, left their wounded in the hospital there for the Union to treat when they arrived.

Apache got there between the exit of the Texans and the arrival of the Union troops.  Slaughtered them all in their beds, mutilated the corpses.

We’re talking good stuff here.  Somebody sure as hell ought to want it.

Maybe I can swing up by Ruidoso and blackmail the Mescalero with it.

Or maybe it’s time for all that stuff to go into the burn pile.

The Great Continental Divide – The Rot Started at the Top

A few generations ago this parking lot was full of people journeying along Route 66.  People stopped here because their engines were overheating, or the kids needed to stretch their legs, or they just wanted to pause for a view of how the water divided.

The view wasn’t all that much, but a dad could walk down below with the kids, step behind a phony hogan, and tell they chillerns if they pee here their water would go both ways, ending up in two different oceans.

The hogan was a lot more inviting back then.

It hadn’t played hotel to a thousand stranded hitch-hikers and drunks looking for a roof. 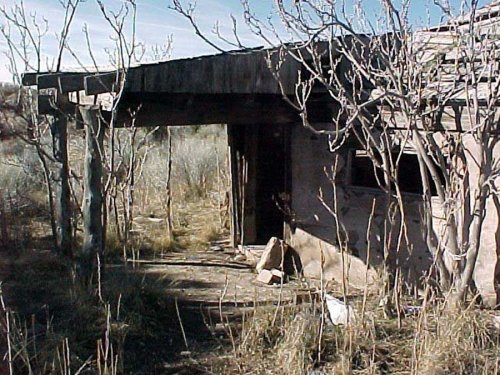 The roof, of course, still held out the rain and snow.

It hadn’t entered the phase before even the drunks avoided it.

Though all the seeds were planted.  All they needed was nurturing a generation or two. 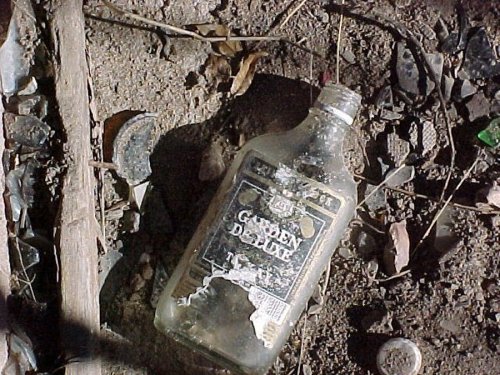