His functional net worth declined.

Hi readers. Thanks for coming by. The economic illusion we’ve been using to drive our lives is fragile and thin.  Practical, or functional economics is right there where it’s always been, waiting for a dysfunctional government to reveal it.

And so on, reduced to its lowest common denominator.

Okay, so what about us useless eaters?  Insurance salesmen, congressmen and senators, presidents, CEOs, billionaires, and drug kingpins living down in the ghetto?  Retirees?  Professional military.   Party girls and celebrities.

Well, we’re all worth the same.  The amount of something we produce, minus what we consume.  We aren’t worth as much as a slum welfare mother who, at least, produces 13 children.

For the moment, at least, the fabricated illusion is still holding together.  Even with a dysfunctional government ignoring the alternative reality.

But it’s still worth keeping in mind that we useless eaters are all pretty much of equal value when measured by practical or functional economic standards.  Whether we’re retirees, CEOs of multi-national banks, welfare mothers, or inheritors of the Colgate fortune.

Caves in Germany containing the remains of Cro Magnon people 43,000 show they kept their worthless eaters around during prosperous times.  But when times got bare they discovered a strange new respect for functional economics.

Maybe they eventually found themselves blessed with dysfunctional governments and multi-cave marketeers, besides their retirees.

The proposal to resolve the US debt and deficit spending crisis by making 1 billion dollars last week worth 1 actual dollar next week has a lot of merit, by some standards.  The main one being it’s the only way the debt will ever actually get paid.

But there’s another strong argument in favor of it.  Once it’s done there’s absolutely no likelihood anyone’s gonna loan the people who do it anymore money.  Once it’s adopted the US will enter a bright new era of precisely balanced budge and spending practices.

It’s called ‘burning your credit cards’ in the private sector.

Naturally it will work some hardships on some people.  A loaf of bread costing $52 million, for instance, or a package of Raman worth $962 thousand  will slow down eating habits in some households.

But in the end it will clear up the current debt and reduce accusations by space aliens that worldwide dominant species compulsive consumerism is interfering with their selective breeding programs.

Breeding human beings to create more palatable cuisine for space aliens has to be the highest priority.  Temporary hardships among the breeding stock can’t be avoided.

Japan: “Send us your poor, your hungry and your trouble-makers”

At least the ones past the age of reproduction. 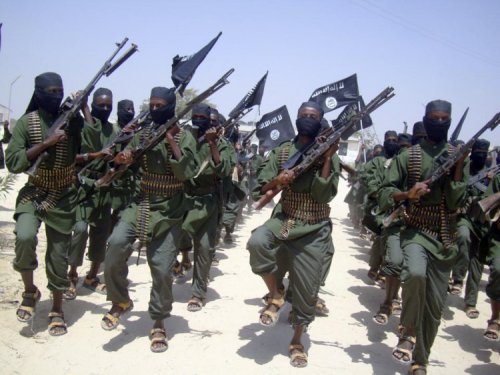 This isn’t precisely them, but someone said Homeland Security’s doing it in some camp in Arizona or New Mexico.  This is probably a more-or-less accurate portrayal of them and how they’d appear if I actually had a photograph of them training, I figures.

Main reason for my thinking so is the abundance of enthusiasm and ammunition they’re blessed with.

It’s comforting to think they’re out there training to protect us from foreign terrorists.

Wild as a Texas blue norther

Hi readers. Thanks for coming by for a read.

This norther turned out to be not all that wild, but it spang brought the first taste of fall.  Caught me not knowing exactly where I’ve got my sleeping caps stored away.  Had to settle for a sweatsuit jacket with a hood.

Cats mostly stayed in the RV with me during the night, though they had to trip outdoors occasionally to make certain things were going okay out there.  Didn’t take them long to decide everything was hunkie dorie enough to scratch on the screen and trust to the Universe to protect things from the space aliens sneaking around out there.

Heluva a fine morning out there.  More stars than I’ve seen for a while, Orion and the Pleiades romancing.

The Toyota RV should be gone from here within the next few days, along with the old 4 Runner and the pickup-bed trailer, got a guy wants the chainlink dog-runs I used for a chicken pen, too.  Put my Toyota RV Onan generator up on Craigslist a few days ago, but it hasn’t drawn any excitement.  Might have to lower my expectations about the value of it.

So here I am being methodical about running off into the sunset, which represents something of a behavioral change for me.  But I’m getting a bit long in the tooth to be responding to the wild as a Texas blue norther side of my youthful character I’ve always tried to nurture.

I’m figuring by the end of October I’ll be somewhere I don’t need to be wild to still have a few challenges and healthy moments of self-doubt.

I still have to figure out some way of getting a mailing address in the neighborhood of the Texas/New Mexico boundary, which is probably going to be challenge enough for most usual purposes.